skip to main | skip to sidebar

Covey Alleged to Be the Antichrist

LINDEN, UT—Area resident Rulon “Liberty” Cannon reported at a press conference that he has uncovered the identity of the antichrist or “at least one of his generals in the battle for Armageddon.”

Cannon, proprietor of the Latter-day Herbs market in nearby Orem, reports “decades of careful scripture study” as his primary credential for “discerning angels of light from the servants of darkness.”

Cannon’s breakthrough came to him in local Rock Canyon, where he collects herb specimens and “prays for guidance” on a weekly basis. Quoting from Cannon’s 78-page publication, The Wolf in Lambswool, the argument is clear if somewhat circuitous: “That abominable green mansion that appeared at the mouth of the canyon proved the missing clue. It’s inspired by the architecture of the corrupt lands that denied the Christ and joined with the whore of all the earth, and that desecration of abomination in front of a sacred landmark made me think, what if the antichrist is among us?”

This conclusion, rejected by all present with the exception of the reporter from the Salt Lake Tribune, led Cannon to investigate the origins of the spacious home.

“When I realized the man’s name was Covet, it was like a bolt of Kolob lightning reflected in the kokaubeem,” he says. When pressed, Cannon admitted that the owner’s name is spelled Covey, though he claimed that the accepted spelling was a “pseudoname,” as the “beast is indeed crafty.”

Cannon began careful study of the Covey oeuvre in hopes of confirming his initial intuition. “I studied every word he wrote, and I saw that he started off sounding just like the Lord’s anointed, with great advice about the gospel that appears eternally true. But then a couple of books later, Covet [sic] had overtaken the gospel with the preachings of mammon. When he proclaimed his seven habits, I realized that he was disguising the number of the beast with the sacred number seven. Six times three is eighteen, which contains the digits one and eight. Subtract one from eight and you get Covet’s seven.”

Cannon cites the presence of bar codes on Covey’s books as further evidence of the oft-cited image of John’s apocalyptic beast. His document then delves into social commentary, as he decries progressive materialism in “Zion,” a local synonym for Utah. “This seven habits message is that you can sell the Lord’s gospel for a mess of potage. Peddling eternal principles to the servants of the adversary is about as antichrist as you can pretty much get. I see his demonic face gloating at us when he fools us into accepting his priestcraft. Even some among the faithful will be fooled into thinking the Covet building is one of the mansions in the Father’s house.”

Cannon’s tract is available at Latter-day Herbs as well as local truck stops and travel plazas.
Posted by Christopher Bigelow at 5:05 PM

krysann said...
This comment has been removed by the author.
3:08 PM

krysann said...
This comment has been removed by the author.
3:08 PM

What will you guys come up with next?! From where I'm standing, I see some rather sad & empty figures who will never see anything that is good in a Mormon no matter who he/she is or what good he/she does. Thanks to you, I won't be reading this BLOG site anymore. It is loaded with your anti-mormon garbage. Maybe you need to take a good hard look at yourselves and spend this season trying to do something good for others, just as the Savior of the world, even Jesus Christ whose birth we celebrate at this time, would want you to do. Remember, He is no respecter of persons so you may want to start with serving those Mormons that you clearly hate. GET A LIFE!! I'm outta here.

How do I contact your blog for submission of a short story for consideration?

Nice blog you got here... Just droppin' by to say hi! http://www.arts-and-entertainment.info

beautiful blog..pls visit mine and be a follower.. thanks and God bless..

This kind of information is very limited on internet. Nice to find the post related to my searching criteria. Your updated and informative post will be appreciated by blog loving people.

The Anti-Christ has already come and gone, but unless the members of the church prepare themselves to receive the hard truth of who it was, they'll never believe it. Study well church history and the prophesies of Daniel 9.

Come on, Sugar Beet, you "out" Covey as the Antichrist, but don't do an article about the most earth-shattering news yet revealed this year: Liam Neeson IS Martin Harris! I'm not making that up! (http://www.youtube.com/watch?v=uakoUpfoWfA)

I love Covey and have learned much from him. His books continue to help me as much in my business life as in my current calling as a stake president.

Mind me asking if these are true rules of Mormon missionaries?


Good post,You have some food for thought always, to the extent that the different ways to add some nice changes in your Blog.
Cheap Essay Writing

Someone has outed you to a portion of the Ex-Mo Web community, at

You better keep up the good work! I love the bellowing of the gored oxen!

Someone has outed you to a portion of the Ex-Mo Web community, at

You better keep up the good work! I love the bellowing of the gored oxen! 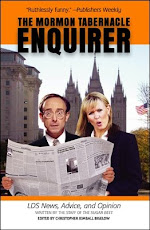